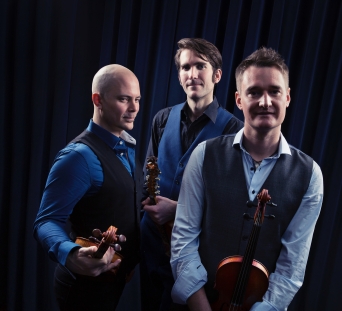 This isn’t just another trad band, they were number 13 on the Trans Global World Music Chart for February 2017 and none other than Daily Beast called them one of the 30 Most Intriguing Musicians of 2017.

The Nordic Fiddlers Bloc is a fiddle trio that masterfully blends the traditions of Norway, Sweden and the Shetland Islands. Olav Luksengård Mjelva (Norway), Anders Hall (Sweden) and Kevin Henderson (Shetland Islands), have swiftly gained a reputation for their gripping and unique blend of fiddle music since the inception of the Bloc in early 2009. They maintain a firm focus on the traditions of their home while developing a sound that has been described as “meaningful”, ”intense” and “invigorating”.  Their clever use of harmony, rhythm, riffs & bass lines creates a sound that leaves the listener enthralled but at the same time dumbfounded that the sound only comes from three fiddles. 2016 sees the release of their eagerly awaited second album, “Deliverance”, following their eponymous debut album released in September 2011 to great critical acclaim.