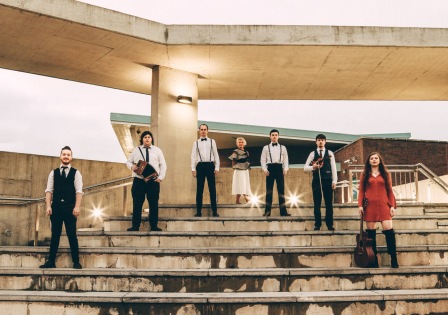 There has always been a romance between music and dance in Irish Culture. This romance bore fruit in 2017 when a musical director and a lead dancer met on tour and their shared love for music and dance blossomed into Echoes of Ireland. A seven member troupe of three champion Irish dancers and four multi-instrumentalists celebrate the creativity of Irish music and dance traditions, old and new. The show includes a mix of dances, tunes and songs sung in both Irish and English.  Envision 1920’s New Orleans meets the Hills of Donegal, swing jazz meets dancing at the crossroads.

With infectious charm, Echoes of Ireland puts on a high energy performance, complete with anecdotes that provide a cultural setting for the numbers, and a fair amount of Irish humor. But this is not a one way street, the highlight of every show is audience participation.  Audience members get to strap on their dance shoes and warm up their vocal chords because they are cordially invited to become part of the Show, for perhaps one night only. The show is written with energetic lifts throughout (both dancers legs and audience excitement), that keeps audiences on the edge of their seats and sends them home with “WOW” on their lips.

Growing up in the West of Ireland, the musicians learned the rich styles of their elders which formed a foundation to which they added their own innovations. All accomplished musicians on their own a combined total of over twenty All- Ireland titles spanning across a variant of competitions, together they morph into a single-minded unit that exquisitely performs a range of styles from lively jigs, reels and polkas with infectious beats to slow airs with lilting melodies to songs that tug at the heart carried on beautiful voices. The band includes musical director Conor Broderick who plays piano/flute/bodhrán, Sean O Dalaigh on fiddle/bodhrán/guitar/vocals, Laura Doherty on guitar/fiddle and Brendan McCarthy on button accordion/concertina. They are all composers as well as performers and have a passion for traditional Irish music and a desire to innovate.

The dancers began dancing as soon as they learned to walk and were competing before the age of 10, winning a combined 52 regional, national and world championship titles. The choreography includes both heavy and light shoe dances, from beautiful slip jigs with heels very high, often called “the ballet of Irish dance” to the pulsating, jaw dropping rhythms of the acapella. The dancers Nerissa Shea and Michael Friel both studied at Rothwell Woods Academy and were inspired to start competing at an early age. The youngest dancer of the troupe,  Jamie Hennessy is referred to as the pocket rocket due to his gravity defying spins leave both the band members and the audience members picking up their jaws.

Nerissa, the choreographer of the group, began dancing at the age of three for the Rothwell Woods Academy of Irish Dance. During her competitive career she received first place in seven All-Ireland and International Championships, eight North Leinster Championships and in 2010, received first place in the North American Championships in Chicago and the first CRN World Championships. In 2012, she graduated with a BA in Irish Music and Dance from the University of Limerick where she also received the Marie Duffy Foundation Award for Excellence in Dance Performance. She has been dancing professionally since 2010. Most recently, performing the lead female role with Celtic Rhythms of Ireland. She has been touring for the last eight years with an array of prestigious shows such as: Gaelforce Dance, Ragús, Dance Masters, Spirit of Ireland, Celtic Nights and Celtic Dance Fusion. She also recently graduated with a master’s degree in Applied Sport and Exercise Psychology from Waterford Institute of Technology receiving top grades in her thesis entitled: ‘An Investigation into the Relationship between multidimensional Perfectionism and Motivational Climate in Elite Adult Irish Dancers’. She hopes to further this study in the future by undergoing her PHD.

Michael has been a keen Irish Dancer from the age of five. Ever since the first class he attended he relished the opportunity to compete or perform in any capacity. Dancing under Cumann Rince Náisiúnta, he became a champion level dancer at the age of ten. On the competitive Irish Dancing circuit he dances for Rothwell Woods Academy, under the brilliant tutelage of Tina Rothwell and Kim Woods. He has won eleven Regional, fourteen National and four World titles as a soloist, along with a multitude of team titles in numerous disciplines. After completing a university degree in Computer Science, Mathematics and Philosophy his love of the art of Irish dancing inspired him to pursue a professional career in dance. To date he has performed internationally with shows such as Celtic Dance Fusion, Spirit of Ireland, Celtic Rhythms of Ireland, Celtic Legends and Titanic Dance, among others. He has also performed as a lead dancer with Dance Masters and Gaelforce Dance. Having qualified as an Irish Dancing teacher in January of 2016 Michael plans to open a school of Irish Dancing at some point in the future.

Jamie began his Irish dancing journey at the age of 6 with Scoil Rince Uí Shé in Dublin, one of the most prestigious schools in CLRG (Irish Dancing Commission). Jamie soon found a passion for dance with the help of his teachers Áine and Seamus O’Shea as they guided him to become a successful competitive dancer. In Jamie’s career he won 7 regional Championships, placed 2nd in the Irish Nationals and also placed 4th in the World Championships in solo dancing. Jamie has also had success in Ceilí dancing and has won the All Ireland’s 4 times and the World Championships 5 times with his team. Jamie has also had the opportunity to perform in Ireland and internationally. Having performed in domestic shows such as Celtic Dance Fusion and Laochra in Croke Park,  Jamie then went on to tour with shows such as Celtic Rhythm of Ireland and Dance Masters. Jamie’s passion for dancing has inspired him to further pursue his career in Irish dancing and looks forward to what the future holds in relation to his dancing career.

Conor began Piano lessons at the tender age of five after his parents noticed his ability to play songs on the radio by ear on a toy piano that was in the house. Now, with seventeen years of experience, Conor holds the role of Musical Director in the Celtic Moonlight production. He began composing at the age of sixteen when he won the Kevin Dwyer award for his composition Draiocht na Fairge. Conor has toured extensively around the world playing the piano as far as Moscow and Zimbabwe. Over his years of experience, Conor has amassed seven All-Ireland Champion titles at the Fleadh Cheoil na hEireann for his piano ability. He recently completed his Bachelor of Arts in Irish Music and Dance at the World Academy, receiving top grades in all his performances. We are delighted to have him on board as Musical Director as he is a musician in high demand.

Laura began learning to play the fiddle when she was six years old. After just a year and a half playing music, she began to take part in competitions. Laura took part in Community Games for group music, where she won the All Ireland title, consecutively, four times! She also came in second place the year after. She began competing at Fleadh Cheoil na hEireann when she was just seven years old. She received 3rd place when she was twelve years old and has qualified every year since on various different instruments. She holds six All-Ireland medals for the Mouth Organ, an instrument which she taught herself. She also began teaching herself guitar at the age of fifteen and now performs on stages all around the world on the guitar as one of her main instruments. Laura performed as a guitarist/singer with the company “Celtic Legends” where they toured Central and Southern America, France, Costa Rica, Panama, El Salvador, Guatemala and Colombia. They also did several television appearances while in these countries. She made her first album at the age of nine with her brother and some friends. Over the years, she has supported some of the biggest names in concert such as Dervish, Project West, Kila, Goitse, We Banjo 3, De Dannan, Paul Brady, Notify and Damien Mullane. She has also played a number of sell out concerts in France with a group called “Teannas” alongside groups like Frankie Gavin, The Raparees and Beoga. She recently won the Molloy award in Birmingham with a group called “Ignition”. She embarked on an independent tour of America last year as a singer/guitarist where she covered 5 states in 5 weeks.

Brendan started his love of accordion at the young age of seven, and this love has been nurtured and blossomed over the past eighteen years as he has collected over 14 accordions. He began writing music and composing at the age of sixteen, and today is an esteemed and respected composer with supergroup Ímar having recorded his music and his own tunes appearing In the Celtic moonlight production. Brendan is a multi-instrumentalist, also playing the concertina, and whistle. Over the years Brendan has accumulated many accolades, being a multi-all-ireland winning champion being part of the group that won the All-Ireland Scór na nÓg in 2007 and 2008. He is also a graduate of the World Academy with a BA Irish Music and Dance. He now attends the University in a different capacity, teaching masterclasses to the current students.

Sean is a fiddler, guitarist and singer/songwriter based in Limerick. Seán was born in Germany, to a musical family of seven. After beginning to learn the fiddle from a very young age he began playing in local sessions with his family and other local musicians. At the age of thirteen he began teaching himself how to play the guitar, and also began writing songs. In this time he also became a core member of his family’s band called Trazz. Since then Seán has come a long way, studying the BA Irish Music and Dance at the World Academy in Limerick. During his time in college he had the chance to learn from and collaborate with incredible musicians from all walks of life. One of his earliest projects was Sean’s Walk, a trio Seán started who performed songs that Seán had written over the years. Since this, Seán has been part of many different projects such as The Third Space ensemble; a group that looked at fusing Irish Traditional Music with Indian Classical Music. His most recent project however is a traditional-based trio called Hoodman Blind. This trio focuses on bringing a new light to Irish Traditional music by taking influences from many different genres such as Appalachian and Scandinavian folk music, as well as minimal classical and rock. Seán’s music has brought him to play all over the world from the French Alps to America as well as playing in many festivals throughout Ireland such as Electric Picnic, Other Voices, Soma Festival, Limerick Fringe, Galway Fringe, Willie Clancy Week and many more.