Matthew singing a tune he learned from his grandmother at the kitchen table. The song starts with his granny singing a verse before Matthew, Teresa and friends take over.

A beautiful story video with imagery to match the poetry. From Connla’s second album, The Next Chapter.

In the US we have hundreds of radio shows that focus on ‘folk’ music, over the pond the opportunities are not so vast. Mark Radcliffe’s show on the BBC is a gem. His curation includes the latest and greatest as well as the tried and true. Hats off to you Mark, keep it up.

This weeks show included Archie Fisher, The Trials of Cato and Malinky (remember them?) as well as Martin Hayes, Rura…

A wealth of knowledge and great music, well worth a weekly listen. If you don’t know it, give it a try here https://www.bbc.co.uk/sounds/play/m0005v62.

Love these guys. So much energy!

Another beautiful release by the UK duo. The way their voices work together is truly sublime. They are on tour in the US right now and are dazzling audiences as they go.

The unstoppable indie folk/fusion band Calan topped the polls at the BBC Wales Folk Awards to take the title of best band. Their fresh sound and high energy routines proved to be a hit with the adjudicating panel as Wales celebrated the very best of folk and roots music.

The band have come a long way since they began busking in the streets of Cardiff to help pay for university fees. Now they perform in venues and festivals all around the world from as far afield as Canada, USA, Borneo and Australia.  And this award comes hot on the heels of their celebrated performance with the Breton Symphony Orchestra in Rennes. A performance that will be repeated with the National Orchestra of Wales March 1st 2020 on the same night that Calan release their 5th studio album. Their brand of high energy routines, verve and raw excitement led one reviewer to say, ‘Move over Tom Jones, Katherine Jenkins, the Manics and Super Furries’. The Sun

Calan are one of the new young bands riding the wave of a country discovering their heritage of traditional music. In the past it has always been overshadowed by the their celtic cousins or set aside for the more familiar touristy male voice choirs. But here the reels and jigs and pagan harmonies is accompanied with a pounding beat and healthy dose of pop or rap. The Welsh are beginning to believe that Folklore Rocks.

On accepting the award their singer Bethan Rhiannon, paid tribute to bands in the past who have helped build and create this new revival of trad music in Wales. ‘All those who came before us have made this dream come true for so many artists here tonight, they were the catalyst for this vibrant revival in our music’.  Calan were also nominated in two other categories for best album and best live act. Best live act was won by the 15 piece band Pendevig which was set up by Calan and includes all 5 members. So you could say that’s a ‘double whammy’.

But unless you get 15 minutes of fame on a talent show ‘there is no such thing as an overnight success’. The road which led to this award has had some ups and downs and on more than one occasion it’s been decidedly bumpy. Here are some highs and lows.

In June 2015 the computer system broke down at the US embassy. Unbeknown to Calan this resulted in two band members not having the correct paper work for their visas. They were refused entry at Chicago airport, taken to a detainment cell and locked up along with a death metal band from Estonia. Sam, the guitarist from Calan said ‘It’s a pity we all weren’t allowed our instruments in the cell we could have created one hell of a fusion’.

They were deported back to the UK but re-entered the US a few days later with the correct paper work only to find themselves crouched in a basement in New Hampshire hiding from a tornado.

The Calan visa debacle eventually became a subject for discussion in a debate in the House of Commons. The band was hoping for some good live reviews in music magazines but didn’t expect to have their name featured in Hanzard

And it didn’t end there; at the International Festival at Lorient the band caused chaos when security officials tried to halt the Calan show at the Welsh Pavilion situated opposite the harbour.  They wanted the band to ‘calm it down a bit’. Apparently with the ever increasing crowd there was a danger some of them might have fallen into the water.  But it was the band’s last night at the festival and they were in a mood to celebrate. At one point staff could see security guards frantically gesturing but thought they were jumping around to the music. (Or so they said)

It’s understood that officials were due to visit the Welsh Pavilion the next day to give staff a stiff talking to.  Fortunately for Calan they were on the ferry back home the very next day.

Calan are a band with a growing confidence and an even quicker growing audience. ‘Folk’ is no longer a dirty word in fact some would say it’s almost fashionable. But Calan reach out beyond the folk enthusiasts anyway.  They played to capacity audiences throughout their British tour with many new people hearing their music for the first time either via BBC Radio 2’s Simon Mayo and Mark Radcliffe or their televised appearances. One of which was their performance at the Royal Albert Hall alongside Bryn Terfel and Sting as part of Bryn’s 50th birthday concert.

Main stage festival performances have included Cambridge Folk Festival, Shrewsbury and Wickham and Fairport Convention’s Cropredy Festival playing for 26,000 people all at one time.  And yet Calan still remember one of their shows when they took joy in playing a folk club in the south of England in front of a handful of music fans. Not restricted by a sound system or stage lighting, the band decided to play their final number standing on tables and jumping off chairs.

After recording a live session for BBC Radio 2’s Mark Radcliffe show, one of their songs, Tale of Two Dragons, inspired a team of British sculptors for their entry into the international snow sculpture competition in Colorado. Their sculpture called ‘A Tale of Two Dragons’ caused quite an impact. You can see it here in a report by The Telegraph.

To celebrate 100 years since the birth of the late and great violin virtuoso Yehudi Menuhin, Calan were commissioned to compose music for Menuhin’s story book-The King,Cat and the Fiddle. The book was co-authored by Christopher Hope. The commission came from Live Music Now; the organisation Menuhin founded in 1977 to bring music into communities and develop young musicians.

March 2019 in Rennes, France, audiences heard Calan and the Breton Symphony Orchestra play some of the bands’ popular numbers along with others specially written for the occasion. The numbers were orchestrated by Calan’s pipe and fiddle player, the 27 year old Patrick Rimes. The 40 piece orchestra along with a full brass section certainly took Calan’s repertoire to a new level. The concert will be repeated with the National Orchestra of Wales on March 1st 2020, coinciding with the release of their 5th studio album.

The award ceremony took place on April 11th the subsequent program was broadcast on April 14th.  highlights can be heard on BBC Sounds on Frank Henessy’s Celtic Heartbeat.

Calan have proved for years what a great band they are, to the point where genre becomes unimportant. They put on a great show and their albums are always creative and satisfying. They won for Best Group and were also nominated for Best Album and Best Live Act.

Newcomers The Trials of Cato, who Songlines credited with the, “…most impressive debut folk albums of the year.” gained further recognition for there rapid ascent in the folk world.

Well-earned praise for their great vocals in the a capella category for “Hope lingers On” as well as the bluegrass category for “10,000 Days Like These”, the title track off their latest release.

Nominated for their performance in a short form video, the band’s excellent showmanship gets due reward. Winners announced June 22nd, fingers crossed.

Phil Simpson who works with Calan in the UK suggested I look into The Trials of Cato who were to perform at Folk Alliance in Montreal. I was blown away. After the official showcase I overheard someone say, “This is the best thing at Folk Alliance in years”. I don’t know about that, as there is always a lot of talent, but it wasn’t far from the mark.

Very excited to work with these lads. 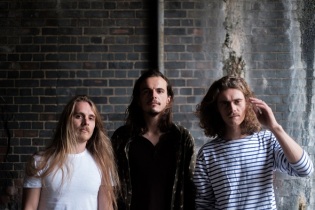